Avg sends out an annoying pop-up to its Free Edition Clients. 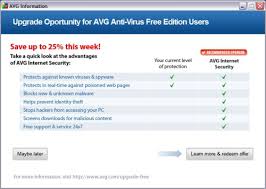 Here’s the take on this:
I called up Support.com that does the technical support for AVG and asked them
about this new pop-up wanting people to upgrade their existing client to the paid
version.

The rep said at first he didn’t know of a pop-up, but then went to check his email.
He came back to me and said that there are 2 different pop-ups that AVG is pushing out
to their Free Edition users.  He stated that Avg doesn’t normally do this type of advertising,
but they are in the business to make money and this would help their sales.

The Rep also stated that their was no way of blocking the pop-ups.  He said that
you should be able to just hit the Maybe Later button four times in the period of one week
and the pop-up should stop.   This may also depending on how many times you restart the machine.

The Good news is that this advertisment is suppose to stop after the first week of August.

The Bad news is that they will most likely do something like this again in the future.

My take on this is:
Well, first off I think Avg is still hands down the best free Anti-virus software out there.
I’ve been using it for6 years or more and I’ve seen it find and remove viruses that
Mcafee and Norton did not see at all.  Yes, I think the pop-ups are very annoying and
I wish that they would stop.  The thing is it’s free software and much better than most
paid software.  It was only a matter of time before the company started something like
this to push sales.

My recommendation is to wait it out and keep clicking the Maybe Later
button, because it’s still free.  But, if you get too annoyed with it go ahead and buy the
paid version for $54 bucks.